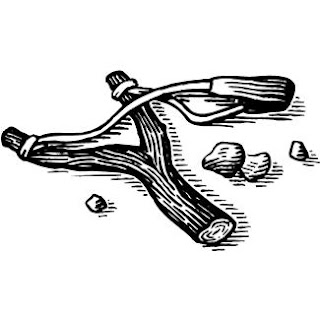 A little boy visiting his grandparents was given his first slingshot. He practiced in the woods, but he never could hit his target. As he came back to Grandma’s backyard, he spied her pet duck. On an impulse he took aim and let fly. The stone hit, and the duck fell dead.

The boy panicked. Desperately he hid the dead duck in the woodpile, only to look up and see his sister watching. Sally had seen it all, but she said nothing.

But Sally said, “Johnny told me he wanted to help in the kitchen today. Didn’t you Johnny?” and she whispered to him, Remember the duck!” So Johnny did the dishes.

Later Grandpa asked it the children wanted to go fishing. Grandma said, “I’m sorry, but I need Sally to help make supper.” Sally smiled and said, “That’s all taken care of. Johnny wants to do it.” Again she whispered, “Remember the duck.” Johnny stayed while Sally went fishing.

After several days of Johnny doing both his chores and Sally’s, finally he couldn’t stand it. He confessed to Grandma that he’d killed the duck.

“I know, Johnny,” she said, giving him a hug. “I was standing at the window and saw the whole thing. Because I love you, I forgave you. I wondered how long you would let Sally make a slave of you.”

From Illustrations for Preaching and Teaching from Leadership Journal - Craig Brian Larson. Baker Books, Grand Rapids, MI, 2000. page 89.
Posted by Southgate Sentinel at 5:00 AM No comments:

Philippians 4:6
"Be careful for nothing; but in every thing by prayer and supplication with thanksgiving let your requests be made known unto God."How many need a cure for a care! The burdened man of business, the anxious parent, the struggling toiler, the perplexed man of affairs- all need some counselor that can be trusted, and some helper that can be relied upon. God is the One to whom to go “in everything.” Thanksgiving is to be joined with prayer, for even the most burdened have blessings here and hereafter. Pray in faith; then comes peace, different from what the world gives, with its pleasure, its promises, and its opiates, and that peace keeps the heart as brave soldiers keep the citadel. And all “through Christ Jesus” - blessed be His name!—John HallFrom Book Four - Bible Illustrations, Heartwarming Bible Illustrations – Richard A. Steele, Jr. and Evelyn Stoner. AMG Publishers, Chattanooga, TN, 1998, Page 50.

Posted by Southgate Sentinel at 1:29 PM No comments:

In the early days of emigration to the West a traveler once came, for the first time in his life, to the banks of the mighty Mississippi. There was no bridge. He must cross. It was early winter; and the surface of the mighty river was sheeted with ice. He knew nothing of its thickness, however, and feared to trust himself to it. He hesitated long, but night was coming on, and he must reach the other shore. At length, with many fears, and infinite caution, he crept out on his hands and knees, thinking thus to distribute his weight as much as possible, and trembling with every sound. When he had gone in this way painfully halfway over he heard a sound of singing behind him. There in the dusk was a man driving a four-horse load of coal across upon the ice and singing as he went! Many a Christian creeps tremblingly out upon God’s promises where another, stronger in faith, goes singing through life upheld by the same word. Have faith in God. Whoever puts his trust in Jehovah shall be safe.

A hospital administrator was startled to see a patient fleeing down the hall out of the operating room, his loose gown flapping in the breeze behind him. He stopped the patient and said, “Do you mind telling me why you ran away from the operating room?” The patient looked at him with startled eyes and said, “It was because of what the nurse said.” The administrator said, “Oh, what did she say?” “She said, “Be brave! An appendectomy is quite simple.” The administrator said, “Well, so what? It is quite simple. I would think that would comfort you.” The patient said, “The nurse wasn’t talking to me; she was talking to the doctor.”

In his book Identity: Youth and Crisis, Erik Erikson tells a story he heard from a physician about an old man with a peculiar problem. The old man vomited every morning but had never felt any inclination to consult a doctor. Finally the man’s family convinced him to get a checkup.

The doctor asked, “How are you?”

The doctor examined him and found he was in good shape for his age.

Finally the physician grew impatient and asked, “I hear that you vomit every morning.”

The old man looked surprised and said, “Sure doesn’t everybody?”
Like that old man, we may not realize that the problems we bear daily are abnormal. We have lived with the problems for so long we can’t imagine how life could be better.

Posted by Southgate Sentinel at 5:00 AM No comments: